The headline across the top half of Iran’s conservative newspaper Vatan Emrooz summed up a year of arduous diplomacy: “Nothing!” Iran and the world’s six major powers conceded on Monday that they had failed to meet a second deadline on terms to insure that Tehran’s advanced nuclear capacity cannot produce a bomb. U.S. Secretary of State John Kerry announced in Vienna that all parties—Iran, along with the United States, Britain, China, France, Germany, and Russia—had agreed, at the last minute, to an extension. The new goal is to reach a political agreement no later than March, with technical details to be worked out no later than June 30th. 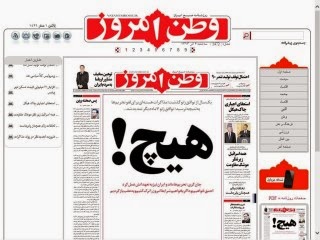 Iran’s hard-line media was gleeful. The newspaper Javan proclaimed that diplomacy will be on “artificial respiration” for the next seven months. In Washington, opponents of a deal responded in a similar vein, calling for new economic measures against the Islamic Republic. “We believe this latest extension of talks should be coupled with increased sanctions,” the Republican senators John McCain, Lindsey Graham, and Kelly Ayotte declared in a joint statement. They also called for the Obama Administration to be required to win formal congressional approval for any eventual deal: “When it comes to the Iranian nuclear ambitions, we strongly believe the most prudent policy would be to verify, verify, verify . . . never trust.”

Holding tough on Iran is one of the few issues that has bipartisan support in Congress. On Monday, Senator Robert Menendez, a Democrat and chairman of the Senate Foreign Relations Committee, called the failure to get a deal “disappointing and worrying,” and vowed to broker a bipartisan effort to make sure that Tehran “comprehends that we will not ever permit it to become a threshold nuclear state.” Senate approval can only become more difficult after the Republicans take control, in January.
Parties to the talks were more upbeat. After thirty-five years of tension—dating back to the 1979 U.S. Embassy takeover—the diplomatic tone between Tehran and Washington has become almost civil, and occasionally even friendly. At a press conference in Vienna, Kerry said, “We have made real and substantial progress on some of the most vexing challenges, and we now see the path toward potentially resolving some issues that have been intractable.” He said that “new ideas” had surfaced over the weekend, though he didn’t give any details. “Given how far we’ve come over the past year—and particularly in the last few days—this is certainly not the time to get up and walk away.”
Kerry praised his Iranian interlocutor, Mohammad Javad Zarif. “The Iranian Foreign Minister has worked hard, and he has worked diligently. He has approached these negotiations in good faith and with seriousness of purpose, and that’s what it takes to try to resolve the kind of difficult issues here.”
Zarif, at his own press conference, pledged that negotiations would resume in December. “After our Americans friends enjoy Thanksgiving holiday, we will be working hard,” he said. “Secretary Kerry and I committed ourselves to working hard.”
In Tehran, President Hassan Rouhani appeared almost conciliatory. Many of the differences between the parties “have been eliminated,” he said on national television. “We have had some agreements behind the scene, but, putting those on paper, we are still not there yet…. Negotiations will lead to a deal, sooner or later.”
What has been remarkable about the negotiations is the integrity of the diplomatic process: none of the seven nations involved, despite their differences, have leaked details of the talks. That is particularly rare for subjects involving either the Middle East or nuclear proliferation.
Little is still known about what really remains in dispute. The six major powers want to severely limit Iran’s ability to enrich uranium or produce plutonium that might be used for a bomb; they have discussed various formulas to achieve that goal, including inspections and changes at facilities. They want to insure that the so-called “break-out time” required for Iran to produce a bomb is at least a year.
Iran, in turn, wants the economic sanctions imposed by the United Nations, the United States, the European Union, and others to be lifted quickly, rather than in slow stages. Even if Congress refuses to soften the U.S. sanctions, the U.N., by lifting its sanctions, could alter the current international mood, which is set against doing business with Tehran. Once the U.N. sanctions are removed, winning international consensus to reimpose them would be far tougher to achieve.
During the next seven months, the basic terms of the current interim deal between Iran and the six major powers will remain in effect. Iran will continue to freeze its nuclear program, and international inspections will continue on a daily basis. In turn, Tehran will get access to about five billion dollars—seven hundred million a month—from its oil revenues that were frozen in foreign banks. (Because of various sanctions, Iran currently has some hundred billion dollars in assets locked in foreign accounts.)
“The world is safer because this program is in place,” Kerry said. “At the end of four months, if we have not agreed on major elements at that point in time and there is no clear path forward, we can revisit how we then want to proceed.”
The Administration intends to persist. As President Obama told George Stephanopoulos, on Sunday, “What a deal would do is take a big piece of business off the table and perhaps begin a long process in which the relationship not just between Iran and us but the relationship between Iran and the world, and the region, begins to change.”
Posted by Robin Wright at 5:05 PM 1 comment: