Imagining a Remapped Middle East
THE map of the modern Middle East, a political and economic pivot in the international order, is in tatters. Syria’s ruinous war is the turning point. But the centrifugal forces of rival beliefs, tribes and ethnicities — empowered by unintended consequences of the Arab Spring — are also pulling apart a region defined by European colonial powers a century ago and defended by Arab autocrats ever since.
A different map would be a strategic game changer for just about everybody, potentially reconfiguring alliances, security challenges, trade and energy flows for much of the world, too. 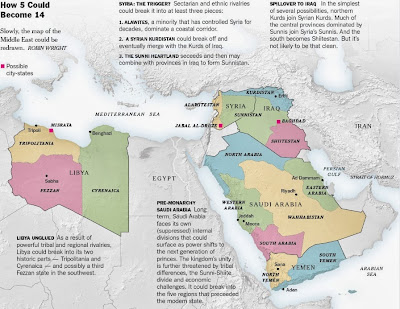 On Iran, Obama's Speech Could Be a Game-Changer
By Robin Wright
If the new diplomatic initiative now endorsed by both President Obama and new Iranian President Hassan Rouhani leads to diplomatic talks -- and potentially even a deal on Iran's nuclear program -- Obama's speech could well be his most important UN address and one of the most important foreign policy speeches of his presidency.

The speech represented the most serious US public outreach to resolve disputes with Iran since the 1979 revolution. It was a particularly stark contrast with the secret (and disastrous) arms-for-hostage swap under the Reagan administration in the mid-1980s.

Obama clearly sought balance. His overture acknowledged past American attempts to manipulate Iranian politics, notably the CIA-orchestrated coup against a democratially elected government in 1953. Now, he said, Washington is not out to change the regime in Tehran. But Obama also pointed out the many transgressions by the revolutionary regime, including seizing the American embassy in 1979 and backing extremist movements that have targeted Americans.

But by empower Secretary of State John Kerry to deal directly with Tehran - in collaboration with five other major powers - Obama took a vitally important step in testing whether new Iranian President Hassan Rouhani does have the will and ability to solve the crisis over Iran's nuclear program.

So it could be a game-changer -- if the words are converted into action by both countries.
Posted by Robin Wright at 2:31 PM No comments:

Here’s a scorecard on how the U.S.-Russia deal to rid Syria of its chemical weapons may play out for some of the key players:
• A relief for the Obama administration and even more for the American public, which opposes the potential slippery slope of even a limited intervention.
• A setback for interventionists who favor greater U.S. involvement on Syria, where 99% of the deaths have been from conventional weapons.
• A boon for Russian President Vladimir Putin, who’s struggled to rebuild Moscow’s status on the world stage since the Soviet Union’s demise. Next stop: Tehran, to discuss terms for a deal on Iran’s controversial nuclear program.
• A reprieve, at least in the short term, for Syrian President Bashar Assad, because he would be the guarantor of a process running well into next year and even beyond.
• A huge setback for Syrian opposition fighters, who were hoping to take advantage of the degradation of Assad’s arsenal that would have accompanied a U.S. military strike. They also hoped to take advantage of the battlefield psychology of U.S. intervention.

But big, big questions remain:
• Will the wily Assad really comply? There are many reasons he now needs to cooperate, but his regime has a long record of being duplicitous and murderous. So beware and thoroughly verify, especially that he hands over everything. I repeat, everything.
• Is this the first step toward a broader ceasefire, as the U.S. hopes? The old issues remain: The Assad regime doesn’t want to cede power, either for itself or the Alawite minority. And the Syrian leader has Russian backing. The opposition has been so divided that it hasn’t been able to speak with one voice -- either in forming a shadow government that could operate from liberated areas, as in Libya, or even in agreeing on terms for peace. Prospects for peace anytime soon seem unrealistic, given the huge array of players and the growing role of extremists among the opposition fighters.
• Will the deal do anything to change the battlefield realities -- and continuing deaths? Even if a peace process is started, a lot of people may well die as it plays out.

Bottom line? There's a glimmer of hope on one of the many, many issues in the complex Syrian crisis. But it’s still only a glimmer.
Posted by Robin Wright at 7:59 PM No comments: